The public radio show Marketplace had a piece on the buzz surrounding Facebook CEO Mark Zuckerberg wearing a hoodie during his company's pre-IPO roadshow this week (for non-finance-watchers, the "roadshow" is a series of presentations to important people on Wall Street in advance of a company's initial public offering).

Zuckerberg is 28 years old. Facebook is based in Silicon Valley, California. As I've mentioned frequently, we are very casual here, especially at technology companies. Hardly anyone wears suits. It's not an exaggeration to say nobody under 30 wears suits. Even chief executive officers of companies valued over $40 billion.

Still, the guy was meeting with potential investors & big-wigs, shouldn't he show some respect? Marketplace pointed out that, just a few months ago, the hoodie was held up in America as a symbol of outsiders, marked by violence, & a TV host even victim-blamed a hoodie for the death of Treyvon Martin. Certainly a hoodie isn't appropriate clothing in the corporate world then?

Maybe it is. At least when you're being authentic to your own self by wearing it. The Atlantic Wire points out that Zuckerberg has worn hoodies & other casual clothes at various conferences & interviews, as well as in non-business settings. This article concludes: "the hoodie shows the real Zuck and therefore the real Facebook -- isn't that what investors want before buying in?"

CNBC actually went as far to say a suit would make Zuckerberg look younger, "like a teenager nervous about the prom" (which is kind of true; take a look at the photos the Wall Street Journal assembled showing that Zuckerberg does indeed wear a suit & tie sometimes).

Both the Atlantic Wire & CNBC compared the hoodie to Apple co-founder Steve Jobs' typically casual wardrobe -- jeans & black turtleneck, only a few suits when he started out (& those were non-traditional with vests, bow ties, & long hair). In Silicon Valley tech culture, casual clothes can mean authenticity & credibility. You're someone who does the work, not someone who just runs the business.

Of course, I prefer a somewhat dressier style for myself at the office, even tho' I could wear jeanss, T-shirts, & hoodies. While I work at a tech company, I'm not an engineer, I'm a writer. Plus being female, I have to work a little harder to be taken seriously (c'mon, you know it's true). There's a fine line between dressing so casual that I'm seen as a nobody & too formal that I get "going for an interview?" jokes (of course, few people wear suits to interviews here, so it really is a joke!).  I certainly can't read advice from places like Corporette & dress like that without taking it down a couple big, fat notches.

But if I'm making a presentation, I'm not wearing a hoodie. A cardigan & a skirt or nice trousers, sure. Probably not a suit, tho. Not in the Valley. 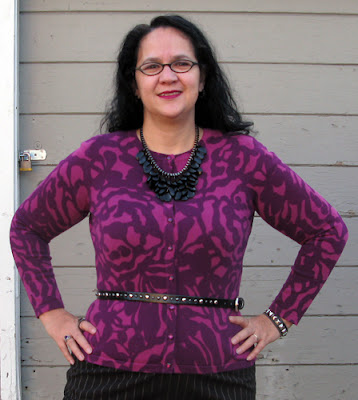