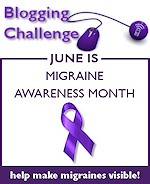 I had no idea until recently that June is National Migraine Awareness Month. See, I'm a migraineur -- one who suffers from chronic migraines. So I'm going to add a few posts between now & the end of the month about migraines, much of which are things I've written on my LiveJournal in the past to describe my experiences.

Basically, I've had a headache for 27 years now, off & on. Since about age 16, I've been prone to a migraine every couple of weeks, just like my mother (it's totally genetic). I've tried most every medication available & am currently on a preventive med cocktail that reduces the frequency & severity. But they're still there. When I'm under bright lights, when I hear loud noises, when I don't eat on time, when a weather front comes in, or for no reason at all, I might get a searing, debilitating pain in my brain.

It's like this. I think these chronic pain syndromes are kind of like having a third leg. But it's a useless limb, vestigial, totally immobile, you can't do a thing with it. The leg just hangs there, in my case, out of my skull. It's just this *thing*. It's in the way. It's heavy. It's bothersome.

For me, it doesn't always hurt like hell. It often is just a nag, a trouble, a burden. Like carrying around a third leg. It gets in my way. Makes doing everyday things pretty hard. Not impossible. You figure out ways around it. 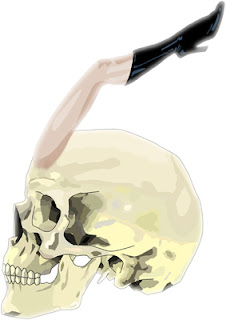 Since the third leg is growing out of my skull, I can actually function pretty well -- it's like an enormous & very ugly turban or one giant freaky dreadlock. Sometimes it blocks my view or makes it hard to lift my neck. Really makes it difficult to get out of bed some mornings.

But I've learned how to adjust after all these years, & there are plenty of days where me & the third leg move along alright. I kinda strap it on my back, & it's more like I have a hump. And you can deal with a hump more easily. I sit a little differently, I'm not comfortable, but I can get around OK.

Then there are the days when I just want to cut that fucking third leg off, goddammit. Get a hacksaw & rip the cocksucker to threads. Chew it down to a stump with my own teeth, if only I could reach it. But I can't. Nothing cuts through the bloody thing. Not a single thing dents it. It swings around in my face, mocking me, taunting me, slapping me upside the ears, pulling down on my skin, making my eyes bleed, ripping out my earlobes, twitching, snaking everywhere. After it's done torturing me, I'm an exhausted wreck with no visible scars. Still have that floppy third leg on my head that nobody else can see.

And then it goes dormant for few days, like it's tired out too. I can tuck it up under a hat for a bit & pretend it doesn't exist. Imagine I'm a normal girl. Without a third leg. And mostly, I'll just deal. I'll be OK. I've dealt with it so long, it's second nature. It's like, well, it's a part of me. It's another limb. It's a part of my body that behaves in this weird manner, not especially practical or attractive, but manageable simply because I'm so used to it.

It's not horrible, I'm not dying, I'm not totally crippled. I have two perfectly useful legs that get me around just fine. The third one isn't interfering with them at all. But it's still there, in the way, & I can't ignore it. Not for too long, anyway.

National Migraine Awareness Month is initiated by the National Headache Foundation. The Blogger's Challenge is initiated by www.FightingHeadacheDisorders.com.
Posted by Trystan L. Bass at 4:47 PM