But not in a granny, old-fashioned way, I hope. These crochet stockings are good for summer because they're airy so therefore comfortable in the heat while getting to & from the office, but a little covered up for the indoor AC. And the cats, well, I'm just a cat person. 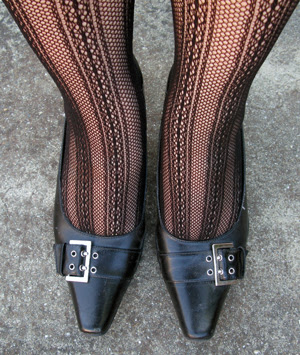 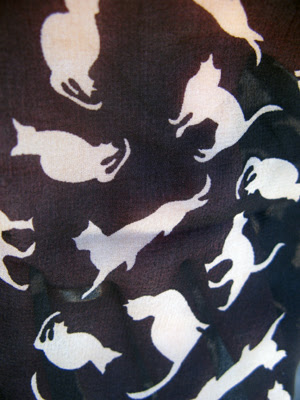 Pin All the Stripey Dresses!

Ah, Pinterest. The greatest Internet time-waster since, um, the Internet! You could do a billion things with that silly tool, but my current fave is window-shopping. I pin a whole lot of stuff I want to buy, semi-realistic stuff (I'm not pinning castles & couture gowns), most of which ends up on my This Is CorpGoth board. It's public if you want to follow.

My current Pin-obsession is stripey clothes suitable for work. Because, wow, there are so many things & at all price points. Take a look as some of my favorite dresses...

ModCloth Meet the Author dress, $52.99 -- Available in sizes S-2X, fabric is polyester, has side zipper & side pockets.

Express striped dress with red accent, $49.90 -- Available in sizes XS-L, fabric is cotton/spandex mix, has back zipper, belt not included.

They're all so cute! I can't decide which I like best. What about you?

When the pathology report came in for my breast cancer, it became pretty clear that chemotherapy would be part of my treatment. This was not a huge surprise -- my oncologist discussed all the possible treatments & suggested that chemotherapy might be recommended due to the initial biopsy report, plus since I'm younger (44 years old), it's often better to be more aggressive with treatment to prevent recurrence. Also, younger patients are better able to withstand the side effects of chemo. Another factor is that I'm happily childfree & not concerned with any effect chemo might have on my fertility (the drugs can trigger early menopause, sometimes temporary, sometimes not).

Thus, I'm now scheduled to start chemo at the end of August. There will be four treatments, three weeks apart. Many of the side effects can be managed with additional medications -- as my doctor said, 'the days of people vomiting constantly from chemo should be over.' But I can expect to feel a bit icky for a few days each cycle.

The side effect I really want to talk about here, tho', is hair loss. There's no effective way to prevent that, & most every chemo treatment (including mine) does cause it. I can expect to start losing hair from my head & elsewhere perhaps the 12th through 16th day after the first treatment, & that will continue until treatments are over. Hair won't start growing back until after chemo is done.

At first I figured, no big deal, I love wigs! For that matter, in college, I used to shave parts of my head, not quite a mowhawk, but the sides up to my ears & under the back. And one of my college roommates did have a buzzcut. So I know how to use an electric clipper.

But then I realized, dang, it takes a long time for hair to grow. When I've had my hair cut into a bob, it'd take a few months to grow out to shoulder length. So I imagine it'd take a year or more to grow from nothing to around shoulder length. That means that if I've lost all of my hair by November of this year, I won't have anything faintly resembling my current hair back until Christmas of next year, if not far after!

Geez. A whole year of wigs & hats & short hair. That's a lot less fun. I've always tended to have longer hair -- I'm a hippie at heart, & I don't get too many short haircuts. I had to hunt around to find the one I used for this post (& notice how all my usual blog posts show long hair). Oh well.

Instead of wailing & gnashing my teeth, I'm still going to make the best of it. First up: Buy cool wigs! Now's the time to go for colors I can't easily get with my naturally almost-black hair. Purple, burgundy, pink! I already have one black wig that could pass for my normal hair if I need to tone it down for a work meeting. But otherwise, I'm gonna rock the gothic-punk hair while I can.

Next, fun hats! Everywhere I've read about chemo, people say they get tired of wearing wigs (plus, the scalp can be tender at first) & enjoy either going bald sometimes or wearing soft caps.

Since I'll be bald during winter, I'll get cold & need hats. So I'll need soft caps for during & right after treatment & more variety of hats later. I like making hats, so maybe I'll design something spiffy for myself too. I posted a bunch of ideas on my costume website with free sewing patterns -- if anyone wants to help sew one for me, let me know :).

Another fun upside: I won't have to go get my brows plucked & waxed (I'm terrible at beating those fuzzy caterpillars into submission), & I'll finally be able to draw them in with cool goth styles.

Making lemonade out of lemons. What else can I do?

This combo of black & white stripes with hot pink feels very '80s New Wave to me. Which is good, because that's a favorite era of mine. It was high school, & I have fond memories of the fashions, at least. Let's call this what I imagined I would be wearing in the future! 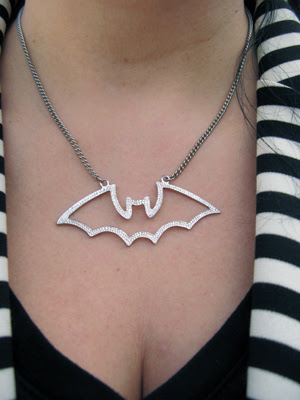 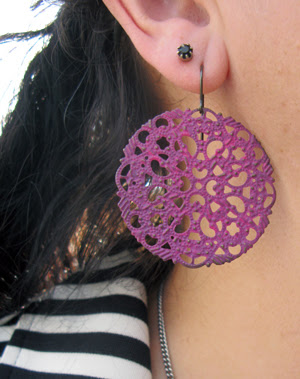 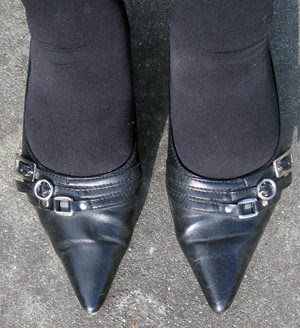 Indian summer is still going strong in most parts of the northern hemisphere, but Halloween goodies are starting to appear in stores. And you know the best things will sell out fast, so when you see something you like, you better snap it up as soon as possible. I love adding a few little items to my home decor, nothing too cutesy or cliche, & I have to be careful not to overload on the clutter. But it's hard to resist treats like these...


Pottery Barn bat wine corkscrew, $14.50 -- Cute & practical, this would make a good gift, maybe buy a couple to give later.

Pottery Barn Day of the Dead skull-print napkins, $28 -- Lovely set of 4, great for everyday use.

Williams-Sonoma skull pancake molds, $19.95 -- Set of 3, how fun for a spooky breakfast any time, make pancakes in skull shapes!

Williams-Sonoma skull appetizer & dip tray, $34.95 -- Heavy black stoneware set, perfect for parties. The store has a whole line of Halloween dishes in this style, check them all out.

These & much more are on my Halloween on Sale 2013 Pinterest board, & I'll keep adding as I find stuff. Check back throughout the next month.

Have you found any good gothic home decor this Halloween season? Share your best finds in the comments!
Posted by Trystan L. Bass at 5:00 PM No comments:

Just a simple, subtle outfit here. Nothing new, but feeling well put together.

I can't get enough of this color combo. But this time, it was an excuse to break in some new shoes.

Do you have a favorite color combo? Or a color you always seem to pair with black? 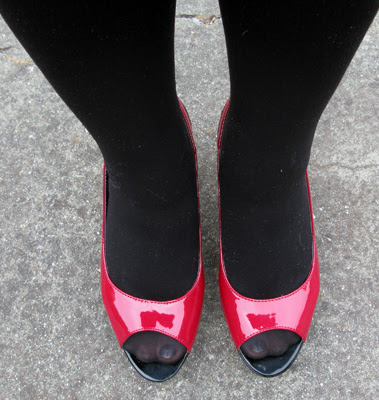 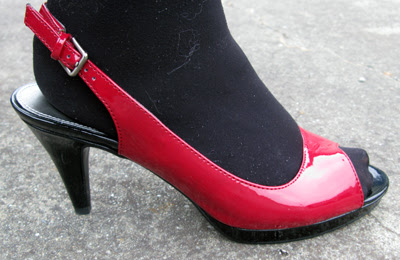 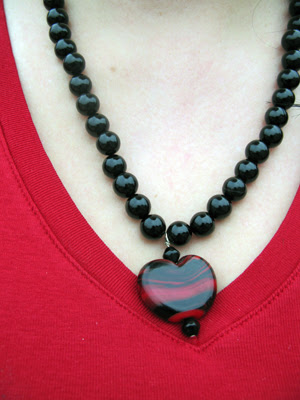 I love maxi dresses, when I can find ones that work for me. First, of course, they have to be black or in dark colors. And second, they have to be the right length. I'm only 5'2", & many maxi dresses drag on the ground on me. I have to hunt around for petite-length maxis, which are rare & even more rare in plus size.

Thus, I only have a couple maxis & was happy to add this elegant one for this summer.

Getting Crafty on This Thing 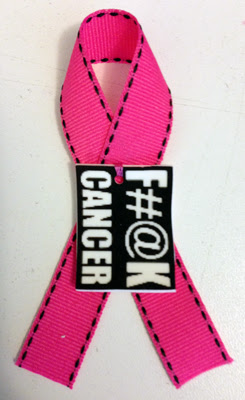 I'm not taking this cancer lying down. Well, other than lying on the couch occasionally & zoning out while watching old episodes of "RuPaul's Drag Race" (if I lose my hair when I start chemo, I'm TOTALLY wearing a drag queen wig!).  I'm getting my craft on when I have time to spare.

A friend made a bunch of these awesome "F#@K CANCER" shrinky-dinks. So I made some of them into my own version of the breast cancer awareness pink ribbons (which I gave out to friends), then I made myself a pair of earrings, adding some gothy beads from my stash. I think I'll wear them to my next doctor's appointment. 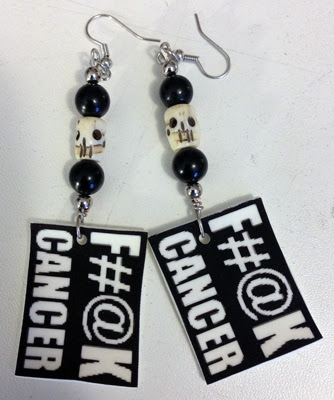