Not depressed, tho' my carpool woes continue, & I really have no idea how I'm getting to work from now on. Also, it's raining here in Silicon Valley -- I dodged sprinkles while taking these photos. But really, this is about the color blue. It's one of those colors (blue, also green) that I don't wear much. I don't have anything against it. Blue isn't like yellow, which looks weird against my already-yellowy part-Asian skin, or orange, which is just too clown-crazy for my taste. Blue is a nice, calm, respectable color.

But every time I buy a piece of blue clothing (with the exception of blue jeans, because I do rather like those), I end up not wearing it very often, & the blue garment is eventually sent off to be traded or thrifted.

Is this because my mother dressed me in more blues & greens as a child, in a 1970s attempt to be gender neutral, when I desperately wanted to be a pink-ruffles-&-frills girly-girl? She even painted my childhood bedroom a deep, nightsky blue, telling me that glow-in-the-dark stars would show up better on it. As a teenager, in the next house, I painted my room lavender purple, much more feminine, & demanded floral-print Victoran-esque bedding. 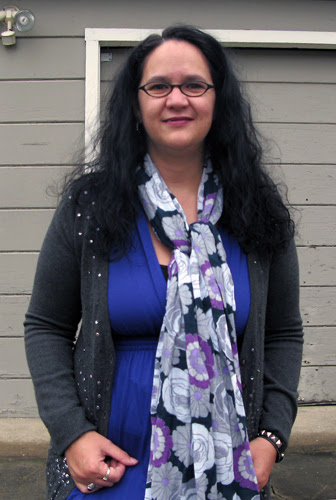 I thought this dress was more purple when I ordered it online, despite the description saying "blue." This is the second wearing, & other people like it on me. It's comfortable & flattering in the fabric & cut. We shall see if it survives the fate of other blue garments.

Are there certain colors you don't wear, even if they might look good on you?
Posted by Trystan L. Bass at 5:34 PM